Kitec Plumbing was installed in many homes in Canada between 1995 and 2207.  Kitec plumbing was sold using brand names; SKitec, PlumbBetter, IPEX AQUA, WarmRite, Kitec XPA, AmbioComfort, XPA, KERR Controls, Plomberie Améliorée.  Kitec plumbing was recalled in 2005 due to failure of pipes and fittings, costing millions of homeowners thousands of dollars in water damage. 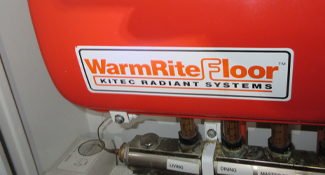 IPEX was the manufacture of Kitec plumbing, which is no longer made.  They are a large manufacture and still make thermoplastic pipe for potable water supplies, such as AquaRise® Hot & Cold Potable Water Distribution Systems, Polyethylene “Pipe with the Stripe”® and Philmac® Compression Fittings.

Plumbers considered this to be a good plumbing system because it was cheaper than copper and being of flexible material, it was easy to install. The pipes are made of polyethylene with a thin layer of aluminum. The Kitec plumbing system usually consists of blue and orange flexible piping and brass fittings. If your basement is finished, take a look near the hot water tank or under your kitchen or bathroom sinks. In addition to the orange and blue pipes, Kitec plumbing systems can usually be identified by the brass fittings, which will usually have one of the following stamps: Kitec, KTC, CSA B137.9/10 and ATSM F1974

The most common issues with Kitec plumbing are:

One of the problems with Kitec plumbing is that the pipes won’t just leak, but are quite likely to burst causing water damage. Unfortunately, it doesn’t appear as though there are any actions a homeowner can take to prevent the pipes from rupturing. The only solution is to replace the entire system.

Kitec Class action settlement created a $125,000,000.00 fund in US dollars for  claims regarding the Kitec System (which may consist of components, individual parts, or as a system, PEX-AL-PEX, PE-AL-PE, PERT-AL-PERT, PEX pipe, valves, fittings, and/or components, manufactured by or on behalf of IPEX whether sold under the names Kitec, PlumbBetter, IPEX AQUA, WarmRite, Kitec XPA, AmbioComfort, XPA, KERR Controls, Plomberie Améliorée or otherwise).  Claim filing deadline has expired, it was January 9th, 2020.

Nova Scotia has issued an advisory to its member real estate agents instructing them how to identify Kitec plumbing, what they need to know about it, what clauses to add to agreements of purchase and sale.

Unfortunately Ontario has not made any efforts to midigate their clients exposure to potential financial loss through purchasing a property with Kitec plumbing installed.  Purchasers should ask their agents to include a clause to protect themselves from this risk.

Note:  Although the manufacture of Kitec plumbing was halted in 2007 it was still being installed in homes and condominiums in Toronto up to 2011.

After January 9, 2020, you can no longer get compensation for the cost of replacing defective Kitec plumbing. You will have to pay out of pocket, which could easily amount to several thousand dollars down the drain.   Kitec plumbing was recalled by the manufacturer in 2005. In 2011, courts in Quebec, Ontario, and the US approved a settlement agreement in a class action lawsuit, and homeowners who suffered Kitec plumbing leaks could receive a share of the $125 million USD settlement.

Claim submissions for this case officially ended on January 9, 2020. However, the administrator is still processing claims and a final distribution plan for the settlement funds is still in progress. Presently, only those who experienced actual failure of their systems are eligible for compensation, but anyone who has Kitec plumbing in their home was encouraged to file a claim.

If you have Kitec plumbing and you didn’t file a claim under the class action settlement, it may not be too late. You’re encouraged to keep checking the settlement administrator’s website as the settlement process continues.

Barrie Home Inspection has encountered Kitec Plumbing installed in many homes and always ensures the the Home Buyer is fully aware of the fact that, even though the plumbing maynot be leaking now, it will fail and leak in the future.  This is especially true for Kitc Plumbing which is transporting hot water.