UFFI Insulation was first developed in Europe in the 1950s as an improved way to insulate hard-to-reach cavities in wood-frame walls. It could be sprayed into building cavities through small holes, an improvement over the 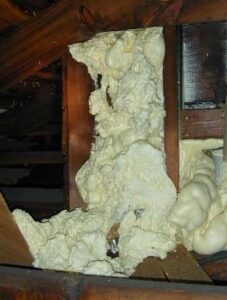 conventional process that required walls be removed to add insulation. It was typically mixed on site using urea-formaldehyde resin, a foaming agent, and compressed air. When the mix was injected into the wall, the urea and formaldehyde bonded to form an insulating plastic foam. UFFI became a valuable thermal insulation product during the energy crisis of the 1970s, when energy-shortage fears led to the exploration for new thermal insulation technologies. It was used in approximately half a million homes in North America.  Urea formaldehyde foam insulation (UFFI) is a thermal insulation product used mostly during the 1970s and early 1980s. This expanding foam insulation was mixed on site and pumped into building cavities in older buildings that had not been previously insulated.

UFFI was banned in Canada in 1980, and two years later it was banned in the U.S. because of fears concerning off-gassing of the formaldehyde, an irritating and potentially carcinogenic gas. The chemical was added on site during the curing process, and some homeowners, mostly in small, poorly ventilated homes, began complaining about adverse health effects, including respiratory issues. Some houses were sold at a fraction of their market value to compensate for the expense of gutting, cleaning and re-insulating building cavities.

Research during this period, however, began to show that, after installation, the formaldehyde gas dissipated within several days to less than 1 part per million, low enough that there was virtually no health risk. The U.S. Court of Appeals overturned the ruling to ban UFFI in 1983, although the ban remains in effect in Canada. Nevertheless, the insulation is still being installed in Canadian homes, according to the Canadian organization Health Zone. Apparently, it is illegally imported from other countries under the brand name RetroFoam™, although the government has taken actions against the perpetrators. UFFI was never banned in Europe, and it’s still used there today. Any formaldehyde detected in a home is likely to be from other sources, such as pressed-wood products (plywood wall paneling, particleboard, fiberboard), un-vented, fuel-burning appliances, carpet padding, or tobacco smoke.

While UFFI is not the carcinogen it was originally feared to be, it does present issues concerning its value as insulation because it suffers from considerable shrinkage over time, depending on how precisely the product was mixed. Inspectors may see an inch or more of shrinkage on each side of the foam insulation block. These gaps can easily allow thermal drift or even air leakage, seriously reducing its effectiveness. UFFI also deteriorates when it comes into contact with moisture or water. Wet UFFI should be removed by a specialist. Also, a declaration of the presence UFFI may be required as part of a real estate transaction.

UFFI can be inspected for based on the following factors:

In summary, UFFI is an unfairly stigmatized and relatively harmless insulation product that was installed primarily during the 1970s.  Inspectors can allay their clients’ fears about its former reputation as a carcinogen, but may want to check its installation for signs of deterioration and ineffectiveness.